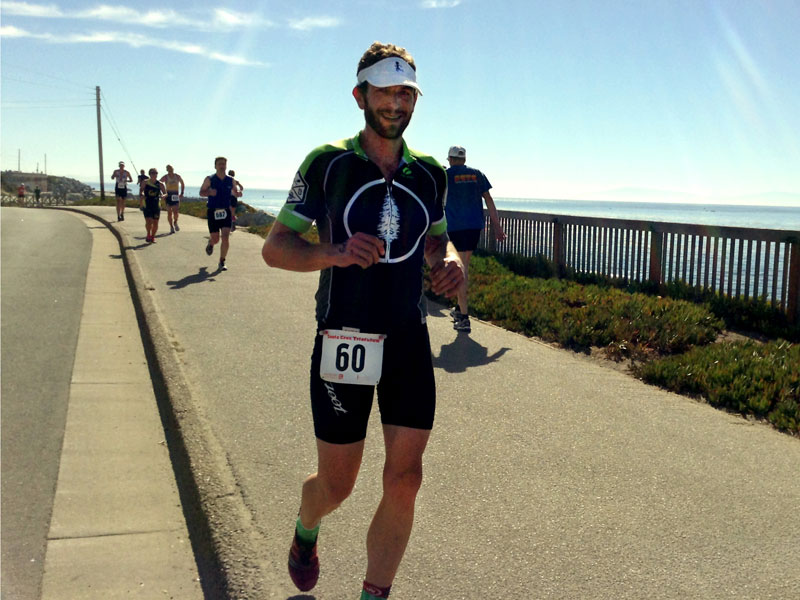 The Santa Cruz Traithalon, held Sunday September 29th, was challenging but so much fun. It was a personal record (since this was my first Olympic distance) at 2:52:54, which is faster than I expected. I hadn’t been able to devote as much time as I would have liked to training (mainly hopping off the bike and immediately going for a run).

The swim was cold – freezing, around the wharf, with a decent barefoot run to the transition area at Depot Park. I finished the 1.5 K swim in 32 minutes which is much faster than I anticipated. The competitive side of me came out on the bike ride, 40 K to Davenport and back – which is never as flat of a ride as I remember or hope. By the run I knew I was going to be in trouble, side ache, legs were screaming “what are you doing, we just did the same motion how many thousands of times and now you want us to do what?” Then, John Ricketts rolls up on his bike, also wearing his MH kit, and pulls up alongside me. We were both surprised to see each other and that was exactly what I needed in that moment, a teammate to help keep me going. John took a couple pictures and then we said goodbye. That interaction helped me to push through the wall and keep running – and somehow, amazingly, I was able to run all the way to the finish line. It was such a beautiful and sunny day! Katie, August, and my mom were there before the finish line cheering me on… I am so thankful to MH Adventures for this opportunity!