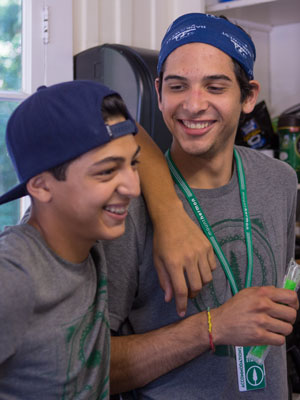 This summer we started a new two–week intensive program for guys in high school (juniors, seniors and graduated seniors) called Band of Brothers. Band of Brothers was created to lead young men one step closer to Jesus by teaching them what it means to be a man after God’s own heart. During the two weeks they spent together, these guys were immersed in Scripture as they learned four main character traits of a godly man: humility, love, wisdom and freedom. They lived together, ate together and went on adventures together, they prayed together and studied the Bible together, all with the goal of integrating these character traits in their lives. Furthermore, Band of Brothers taught these young men that they can’t walk this journey alone. They left the program knowing the importance of having the influence of other godly men
in their lives.

Here’s what a few students had to say about their experience this summer:

“You really get to know the people in the house and you really bond. You see that there are other boys your age that are struggling with their faith and struggling with what it means to be a man in today’s society. You really learn how to be a Christian man.”

Noah was initially skeptical about the program.

“I’m not going to lie. I really tried to hate it in the beginning… but this program was anything but negative. Every aspect had some form of character and made me feel a lot better as a person. When I stepped into it there was no aspect that I didn’t like from the very beginning.”

Lastly, Caleb was asked if he would recommend this camp to other guys and he said,

“For sure! If you are a young man seeking to be a wise man, a free man, a loving man and a humble man, you should certainly do Band of Brothers.”

2015 was the first summer of what will be many summers helping young men cross the threshold from adolescence into manhood. If you know of any students who will be juniors, seniors or graduated seniors in high school, let them know about this program. Spaces for 2016 are going to fill up fast!

Learn more about Band of Brothers