A case for social justice 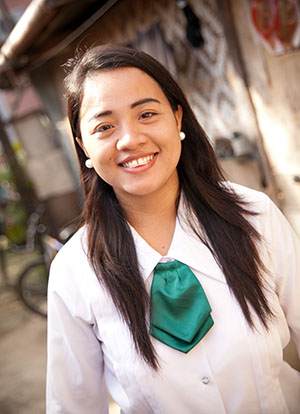 Today’s blog post comes to us from Mark Fisher, the U.S. Director of Red Window Project. Mark will be a seminar presenter at this year’s FIGHT Conference.

While in elementary school, Gina had a dream. Like most childhood aspirations, her dream was a grand one. Gina’s bold dream was to earn a college degree.

She was one of seven siblings growing up “dirt poor” in Cebu, Philippines. And whether naïve or determined or both, Gina became the first in her family to enter high school and then graduate. She even enrolled in college until the tuition fee came due.

That’s when Gina’s glorious goal was exposed for being just a silly schoolgirl’s dream. The reality check came in the form of a bill she could not pay. So she followed her mother into the labor market as a maid.

But Gina was then offered a chance to embark on a job adventure overseas that seemed perfect for her. A neighbor said she could join a band with four other Filipino girls and perform in Malaysia. Gina loves to sing and dance. She quickly agreed and joined her band-mates to head west.

Although “stage jitters” on the first night were to be expected, those jitters were exacerbated when their employers took away their passports and return tickets. Jitters became terror when they learned that their singing and dancing were just preludes to what customers actually filled the bar to purchase. Gina and her friends had been ruthlessly trafficked.

The International Labour Organization estimates that 4,500,000 women and girls are victims of sex trafficking around the world. The primary vulnerability factor for the vast majority of them is poverty.

Despite threats from their captors, an inability to speak the local language, and the lack of money or passports—this heroic troupe of five songbirds fled. Their harrowing escape was more perilous as Malaysian officials refused to help them. But sympathetic Filipinos played a role in this miraculous deliverance through the Philippine Embassy and finally back to Cebu.

International Justice Mission helped prosecute the case against their trafficker, and he was sentenced to life plus 20 years. In the meantime, Gina was referred to Red Window Project (RWP), an innovative nonprofit aftercare organization that specializes in equipping survivors of sex trafficking to land and succeed in promising careers.

Recognizing that poverty is the leading vulnerability factor for re-trafficking, RWP empowers survivors through a comprehensive model of career counseling, market-based job readiness training, employment placement services, and social enterprise work-study program so they can reach economic self-sufficiency. In three years, RWP has served 274 survivors of trafficking and criminal exploitation.

Because education is critical to employability, RWP also provides scholarships for program graduates to qualify for their dream jobs. When Gina learned she could earn a scholarship during RWP’s 12-week career program, the dream that had been suppressed flourished to the forefront.

She was granted a scholarship in April, 2011. In December, 2012, Gina was still persevering in school despite dire poverty and intimidating challenges.

Yet she proclaimed: “Nothing is impossible for God.”

Perhaps she was prophetic.

Just five months later, she was awarded her university degree in hospitality management.

You can learn more about Red Window Project and the work of aftercare with trafficking survivors by attending Mark’s seminar “Lasting Freedom: Best Practice Models to Equip Survivors for Fulfilling Careers” at this year’s FIGHT Conference at Mount Hermon, May 2-4. Click here for more information or to register.

A case for social justice

Asking the Critical Questions about Slavery

Keeping up the FIGHT: Having a Critical Mind and Open Heart