Something Big is Happening at Redwood Camp

“That’s John Watts: he’s a magnet for kids. He seems to be able to identify with their interests in short order. And he has a fascinating story on almost any topic.”

That dining hall scene fits with the biographer who said that John dedicated his life to serving others. Most of the teens wouldn’t know John was one of the nation’s foremost authorities on planned giving for non–profit organizations– helping individuals be the best stewards of God’s resources.

And serving others is what John had in mind when he recommended we establish The Redwood Society, three years ago, to honor those who have remembered Mount Hermon in their estate giving. He inaugurated a similar program at Westmont College in Santa Barbara, where he worked for over a dozen years. 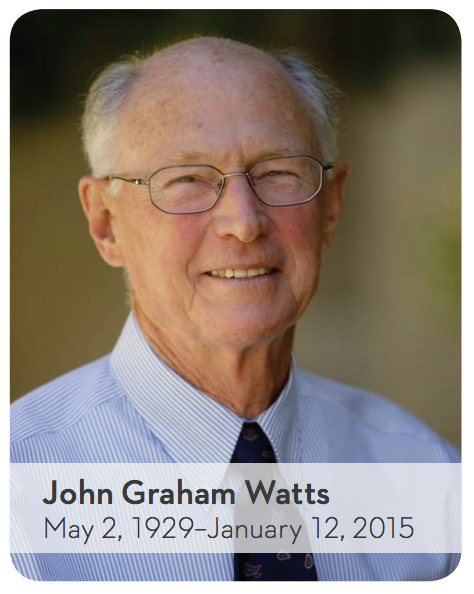 John first visited Mount Hermon in 1960, and in the intervening years helped thousands as a pastor, a consultant or employee for dozens of non–profit organizations from The Navigators to the College of William and Mary.

He capped it off with three summers of involvement in seminars and consulting at Mount Hermon as we established The Redwood Society. He was married to his wife, Patty, for 62 years. Patty threw herself into volunteer work in the Advancement office each of these last summers.

John’s sense of humor, keen mind, and servant’s heart endeared him to everyone, not just to the teens who often filled his dinner table. He will be missed.

For info about how you can be a part of The Redwood Society visit mounthermon.org/redwoodsociety or email dave.talbott@mounthermon.org.

Saved from the Tree

Something Big is Happening at Redwood Camp